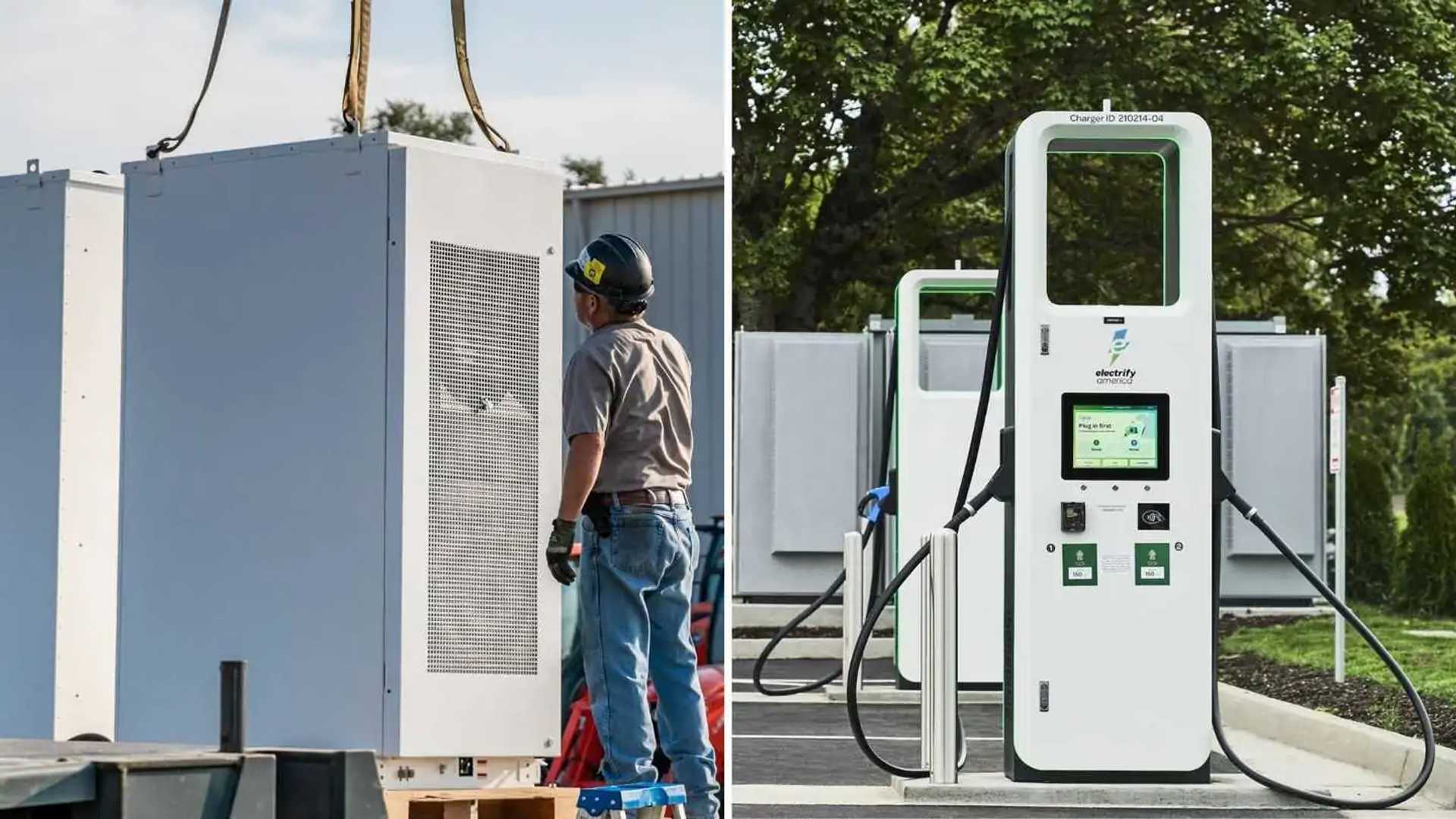 Electrify America, one of the largest fast-charging networks in the U.S. (part of the Volkswagen Group), announced that it installed onsite, behind-the-meter battery energy storage systems (ESS) at over 140 DC fast charging stations around the country, including more than 90 installations in California.

The total number of stations is 693 (with 2,307 individual charging stalls), which means that about 20% are equipped with batteries. That’s more than we thought.

The combined power output of those battery systems is more than 30 MW, which indicates over 200 kW per station. The company adds in an infographic (see at the bottom) that it’s enough to power over 200 EVs simultaneously at 150 kW.

The ESS energy capacity was not disclosed by Electrify America, although we must point out that the press release multiple times wrongly repeats the 30 MW number as “energy storage capacity,” while it is power – not energy.

Installations of battery energy storage systems have continued for a few years now. In February 2019, the company announced an order of Tesla Powerpack systems for more than 100 stations. Those were 210 kW/350 kWh units at the time (100 would be 21 MW / 35 MWh). As of September 2020, Powerpacks were installed at 60 stations.

According to the press release, new, even more powerful energy storage systems are coming in 2022:

“Beyond this installed energy storage portfolio, Electrify America is working on certification and initial roll-out of its next generation of onsite behind-the-meter battery energy storage early next year that will support higher peak power or demand mitigation capability in approximately the same footprint.”

There is a reason behind the installation of battery energy storage systems at fast charging stations.

The chargers have a power output of up to 350 kW and there are multiples each station, which causes power surges for the grid, which applies high “demand charges” for such loads.

In other words, Electrify America installs ESS to lower the overall electricity costs. At some sites, also it might be a necessity, if there is no strong power connection to the station.

If a station has an ESS, it can then not only shave the peak electricy demand from the grid, but also benefit from cheaper electricity during off-peak periods.

A side benefit of a battery is also the potential to maximize renewable energy use.

“One of the prominent obstacles utility providers face can be “demand charges,” which are electricity surcharges on peak power usage designed to capture the marginal costs imposed on the grid by high-capacity, high-utilization infrastructure, such as factories. When traditional demand charges are levied upon high-capacity, low-utilization infrastructure such as high-powered EV charging stations, they place a disproportionate cost burden on the station owners.”

“While many states and utilities look to streamline electricity rates to better support public charging infrastructure, Electrify America’s investment in energy storage helps to facilitate the roll-out of ultra-fast DC fast charging where it may otherwise be cost-prohibitive.”

The next step for Electrify America is to use the ESS also for grid purposes. If the batteries are full and not much charging is going on, the station will be able to support the grid during peak periods.

Such a service is called a Virtual Power Plant (VPP) as the grid operator will be able to call for a certain power level if needed.

Electrify America announced that together with Olivine it will promote vehicle-grid integration in wholesale energy markets.

The two partners so far shifted over 125 MWh of on-peak energy to off-peak hours in over 190 demand response market events in the California Independent System Operator (CAISO)’s wholesale energy market. It’s not a high value, but those are the early beginnings of the VPP.

“With the help of Olivine, Electrify America is driving revenue from behind-the-meter services for its onsite battery energy storage assets, delivering consistent pricing to its customers and offering greater reliability than fluctuating gas prices.

Behind-the-meter services such as demand response help support vehicle-grid integration by reducing the need for more costly and often more polluting peaking power plants. These services may otherwise be used to meet such incremental demand, decreasing the carbon profile and potential emissions associated with the electricity generation that powers Electrify America’s network.

In the future, as utility regulations and energy markets evolve, Electrify America aspires to potentially provide power back to the grid from its energy storage to enhance the vehicle-grid integration benefits of its investments.